Ghana?? Where exactly is that now? Not many of my relatives or friends know Ghana exists. “It’s in West Africa”, I say and then everyone goes “Ohhhh, okay”... The next question addressed to me with a genuinely concerned expression is – “So is it safe???” ... I say, “Why yes of course, one of the safest African countries actually”...At this point I get either one of two reactions or both: 1) Africa is a not a country?!?!?! And 2) How can Africa be safe????

I must admit, I wasn’t too familiar with the African continent myself until I went to South Africa and I too had misconceptions about Africa. It’s funny how we like to put the whole of Africa together and talk about it as one entity – Africa is not safe or Africa is so poor or Africa is so hot or there are so many wild animals n Africa... It is also strange that we let media images of a few places in Africa dictate our general mental image about the entire continent....and also how most media reports from the continent are always about something depressing and ominous.

After returning from Ghana, I had plenty of stories to convince people that there were many good things about Africa... or should I just say Ghana. I was working in Pokuase village, slightly over an hour from the capital city Accra and it was a huge learning experience. It had been 6 years since I went to South Africa, so just being back on the same continent made me feel happy. I always feel a great passion when I’m in Africa (I know I’m generalising again). It is just the energy and the people and the certain oomph that Africa embodies.

Ghana is possibly one of the friendliest countries I’ve ever been to. From the moment that I stepped into the country, I was greeted by smiling faces, and Akwaba’s all around. Akwaba is a Ghanaian word for ‘Welcome’. It’s a typical Ghanaian way of saying “Akwaba, You are welcome” infinite number of times. Even the village that I lived in was full of smiling faces. The walk to my workplace was about 20-25 minutes from where I lived. So each morning, during that 25 minute walk, every single person who walked past me would greet me with a “Good morning, how are you doing?” and a wide smile. The same happened on the walk back during the evenings. I was told by some of the locals that it was a good thing that I responded to their greetings because then I wouldn’t be considered an outsider. I would be a part of their community and so no one would mess with me and even if someone did the whole village would come to my rescue. Nice! 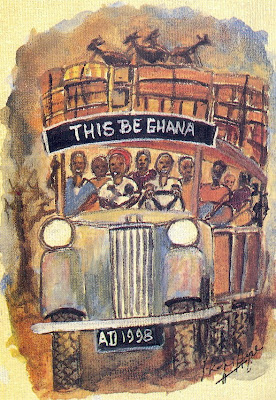 In terms of development, Ghana definitely has a lot of catching up to do. While it has much better development indicators than a lot of other African countries, some things in Ghana still need to evolve and transform, particularly their political system. They do have a democratically elected government, however most political debates centre around the ‘character’ of the leadership rather than their take on social issues. It is not unusual to turn on the radio and listen to one politician talk about how many boyfriends the other politician has and hence she shouldn’t be favoured in the forthcoming election. These were brought up even during my discussions with some of the locals. The younger generation however definitely seems much more informed and concerned about government policies and their international image.
Yet another disappointment was the work culture. Punctuality has yet to become trendy in Ghana. It might seem trivial now, given the other issues that they face, but punctuality is so crucial at any stage of development. How do you get work done if people are never on time? I was told by a local that this (not being on time) is part of their culture and I should enjoy it while I’m there. Seriously ?!?! By making it ‘cultural’ she almost made tardiness a perpetual, everlasting component of Ghanaian life. Such defeatist attitudes must be removed if change has to happen. Not just that, often when things got difficult, the general response I got was “Don’t worry, leave it to God”. Sure, it’s good to have faith in God, but well you need to do something too. I also noticed that Ghana doesn’t have a strong domestic industry of the kind that we can boast about in India. Most of the big companies are foreign MNCs and a lot of the contracts go out to Chinese firms.

That said, Ghana presents so much opportunity because of its open-mindedness and tolerant attitude. The village that I worked in was so open to changes, particularly when they were explained about the possible benefits. I hate to generalise, but often in India, we face major roadblocks in development interventions, largely due to a more rigid mindset and way of living.

Ghana has its own little quirks like any other country and that’s what makes it so endearing. Travelling in tro-tros, cheering for the Black Stars, listening to sermons in the most random places, buying Chinese herbs from a wannabe priest, drinking ‘pure’ water from the roadside plastic bags, the plantain chips, fufu, banku, red red, tilapia, okro stews, having 100% pineapple flavoured alcohol, swimming at Kokorobite, getting soaked in sweat only to be covered by orange dust, having conversations with random people on the street – Ghana definitely has given me some amazing memories and lots of stories. I return from Ghana with fond recollections of Pokuase and working with some amazing women. Ghana has infected me with her energy, passion, open-mindedness and zest for life. Some day soon when I go back, hopefully there'll be a different Ghana waiting for me – progressive, livelier and always on time :)
Posted by Rupal at 11:45 pm

Hmm..i wish they had a like/dislike button as with fb.. interesting read..and i loved the attitude abt "things need to change" ;)

Awesome read ! And nice painting too ! Well post this FIFA World Cup at least one bottleneck goes awat ... people definitely know what and where Ghana is :-)

Rupal
Hi I'm Rupal and this is my personal blog. I'm making an honest attempt to write more often after a long break. I am passionate about development, enjoy painting for myself, dabble in portrait photography and love filter coffee.